Get To Know Marina del Rey

Marina del Rey, California is located in Los Angeles County. It is not an incorporated city and is served by the County. Nearby cities and towns include Venice and Santa Monica to the north, Culver City and Mar Vista to the east, the Pacific Ocean to the west and Playa del Rey, Playa Vista and Westchester to the South.

“The Marina,” as it’s known by locals, is 15 minutes to LAX, and enjoys easy access to shopping, restaurants and freeways.

Spurred on by its proximity to Silicon Beach, Marina del Rey is in the midst of a development boom. Having started in 2005-ish and hitting a slight speed bump with the big recession event in 2007-ish, development is full steam ahead, with as much as $700 million in rumored developments queuing up for the next several years.

With plenty of properties around from MdR’s original development in the late 1960′s and into the 1970′s, deals also abound for both renting and purchasing. Most of these properties are beautifully maintained and offer generous square footage. Lots of newer condo and loft options are available, too. Some are near the water with stunning views and others are east of Lincoln near shopping and restaurants.

With spectacular Marina views, water sports, fitness venues, nightlife and family-friendly beaches, what’s not to like? I lived in a beautiful high-rise in the Marina for years. Every day felt like a vacation.

Median Price for Condos In The Marina: 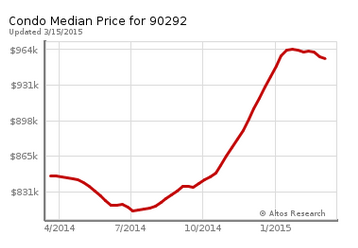